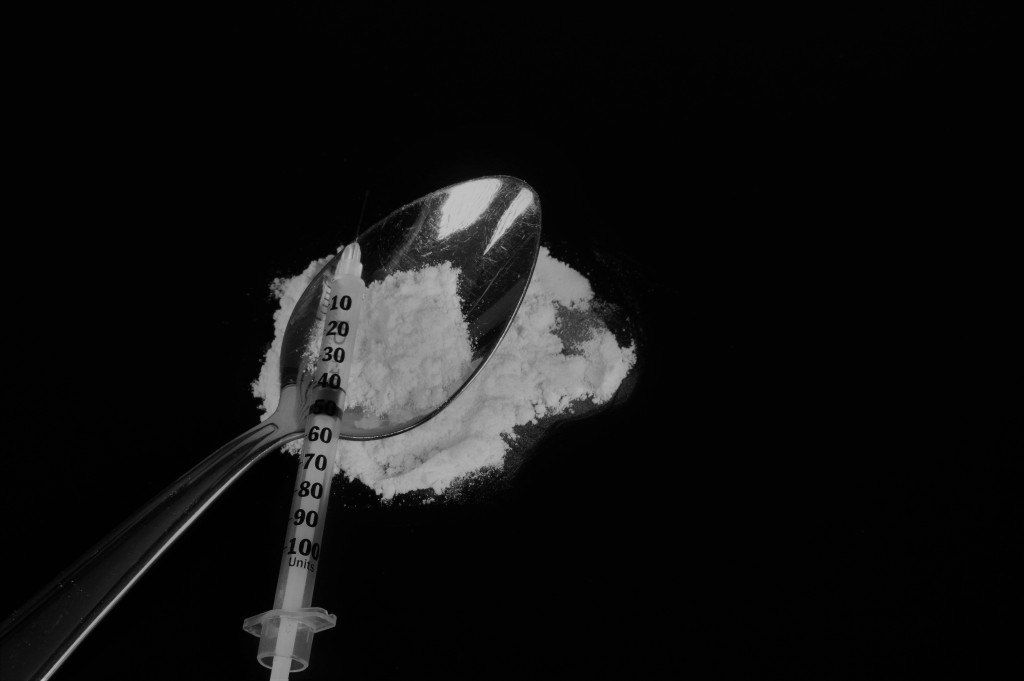 Elise comes from a musical home at Uranienborg in Oslo. Everything is seemingly safe, yet she wants to get away from home. She wants to be weightless, not leave traces. She tries everything. Asceticism, transgressions, too little too much. Finally it’s there. The intoxication that gives her everything she has wanted – namely nothing. To fade out, get numb. Heroin chic is an opera about a social descent without any clear cause. About a disorder that is not soiled by external circumstances. It is enough in itself. The essence.

Maria Kjos Fonn is one of Scandinavia’s most acclaimed authors. She has written short stories and novels all hailed by critics, and is a columnist in nationwide newspaper Morgenbladet, as well as in the Oslo newspaper Aftenposten. She has also written – and performed – various stage texts, performed with music. One of these performances, The Politics of Emotion, a performance with stage texts read to music by Sandra Kolstad, premiered at the House of Literature in September 2019, followed by a tour in Norway and Europe before it was performed at the guest pavilion in Frankfurt in October, and finally in Berlin. The performance was produced in cooperation with NORLA and the Norwegian Book Year.

Maria’s novel Kinderwhore (2018) was nominated to the 2018 Brage Prize and the 2018 P2 Listener’s Prize. For Heroin Chic (also nominated to the P2 Listeners´ Prize), Fonn received Mads Wiel Nygaards Legat and The Natt & Dag Literature Prize. Kinderwhore hass been translated into Danish and German, and Heroin Chic will be released in Danish and German in 2022.

Solveig Sørbø is an autodidact composer, music producer and musician who makes chamber music, film scores, vocal music, and alternative fusion. She has performed across Europe, is involved in an EEA project in Slovakia, and recently scored the film Hans + Liv (Norwegian National Broadcast) which lead to a collaboration with star violinist Catharina Chen and ECM artist Ayumi Tanaka. Solveig is interested in mixing symphonic sections with different sounds and tonalities and in exploring traditional folk instruments in a classical setting.

Besides her artistic activities, Solveig is an initiator of the music and science project MusicLab at the University of Oslo, which is supported by Norwegian Research Council and went international with a science concert featuring Danish String Quartet in October 2021. Solveig is also a host of the music show Solveigs Speisa Musikk (supported by the Norwegian Media Authority) airing on radiOrakel and also available as a podcast.

Currently, Solveig is in the early phase of two musical dramas including a musical adapted from the youth novel Flaggermusmusikk (Fledermausmusik) (Tyra Teodora Tronstad, author and librettist) and the opera Heroin Chic, as outlined in this proposal.

The opera will be realised in several sections beginning with a winter solstice concert where “Lullaby at Sunrise” was performed, followed by “Elise’s Lament” which will be performed in Stavanger Concert Hall on the 4th August. The next steps involve working with different ensembles writing music for situations that entangle with the work in various ways. This way the opera will evolve by meeting different performers and settings until it gets its final form. From 2023 to 2024 we propose that Heroin Chic be developed together with the feXm / NOperas network. The work is threefold consisting of a street opera, a church opera and a stage opera. These can be performed as separate chamber operas, as episodes or as a full-length staged opera. At this stage the opera is produced by Solsnu (Solveig herself), but we also have eligible producer contacts in Germany.

The project aims at investing the topics of addiction, promiscuity, death and light and make neoclassical operatic music accessible to people.

The opera chapter “Elise’s Funeral” has received funding from Arts Council Norway and will be developed in 2022 and early 2023. It is situated in Elise’s funeral in which she herself is a soloist singer. There will be flashbacks to her childhood (“Lucia“), her youth during which she suffered from an eating disorder (“Duet of Bones“), her recurring substance abuse and abstinences (“Heroin“), her death (“Lullaby at Sunrise“) and finally we are back to the funeral during which she performs “Elise’s Lament“.

Elise, a young, talented and beautiful singer is characterized with being angel-like from the outside, but her soul is dark and numb, and she nourishes a death-wish but also a wish to always remain a child, she romanticizes anorexia and bodilessness while engaging in debauchery. The role’s tessitura and melodic style will vary with her age and with her deterioration.

Elise’s mother is warm and loving, but she essentially forsakes Elise by focussing on her success rather than the whole person. Her parts of the aria will be more harmonic, motherly and reassuring than those of Elise.

Joakim is Elise’s boyfriend. His role is sung by a tenor, and his vocal and melodic style will be hectic and rythmic, mirroring his roots in art rock and alternative subcultures.

Anorexia is embodied by a bass/baryton dressed in black. He is perhaps invisible to Elise, nevertheless he controls her. His singing will be dark, seductive and alluring.

This will be discussed with the hosting / collaborating instutution(s).

The musicians can be integral to the action on stage. Their roles may change with the imagined changes of scenery, and they may have occasional spoken and / or sung lines which could eccho things said by other characters in the story, and also Elise’s subconscous thoughts and even her addiction. Using simple costume changes such as hoods and coats, along with smart lighting, their function as accompanying characters may change.

The production will proceed in several stages. Firstly a series of arias and duets will be written for festivals and concert series (current period). Secondly, a short chamber version will be produced consisting of 1 aria and 3 duets with recitative and instrumental parts in between. After the chamber opera has premiered we will develop the work into a full-length opera.

During each stage we will collaborate with the designated artistic team and cast and find a direction together.

If accepted as a NOperas project (pending review) the parts following the first chamber opera will be developed in the following sections:

Musical rehearsal period (2 weeks) where all material is gone through with musical director, musicians and cast and needs for amendments are noted

Tutti rehearsal period (5 weeks) where the opera is developed scenically with director, scenographer, cast and musicians.

2 weeks of adaptation and rehearsal in each of the following opera theatres before local premiers.

Past and upcoming performances:

Fortellinger fra havet, Commission by Heloïse Baldelli and Izabela Maroun where the theme is water. For this, Maria Kjos Fonn and Solveig Sørbø are creating 5 miniatures about water in relation to aspects of the opera. Festivals (TBC): Orfeus (SK), Nebrodi in Canto (IT) og Associazione Culturale Colle Ionci (IT).

We also have several more commissions (TBC) and letters of intent (funding-dependent).

Please don’t hesitate to get in touch if you’d like to commission a piece for your own ensemble. Any instrumentation is of interest, and if you have an ongoing project we can look for connections between it and the opera. This is how Heroin Chic is boud to grow – in interaction with ideas, places and musicians. Here are some ideas from us that we know that we’d like to explore: choir piece with girls and men, mixed choir part, duet between soprano and baryton, aria with dramatic tenor. Get in touch if you are interested in these ideas or want to share yours.

Heroin Chic has religious undertones, and in the Christmas segment we explore “advent” as a framework for waiting for redemption – which is what Elise does when she’s hunting for a new dose. Elise’s sense of time running out, and wasted years, become clearer in a quiet advent season. In addition, Christmas reinforces the contrast to Elise’s memories of her happy childhood, and her loneliness and alienation. When Elise finally gets the shot, Elise comes as a child and wraps the adult Elise in a blanket. She sings an aria that symbolically points to Elise’s fall to the underground, while the soaring song and the child singer in a beautiful Christmas dress, contrasts it.

The following text samples are in Norwegian, but we trust that you will still be able to grasp their meaning, richness of symbols and musicality. We will discuss the issue of language with you should we get the project. We are open to many solutions, be it German language with help from a translator (in this case perhaps the translator of the German edition of the novel might offer some advice), an English version, or keeping it in Norwegian with subtitles.

Lucia – a duet between Elise and her mother

Knokkelduett (Duet of Bones) – a duet between Elise and Anorexia

Heroin – a duet between Elise and Joakim

First aria from the project, “Give me the Sun (Lullaby at Dawn / Sunrise)” from the scene where Elise asks her mother to give her a heroin injection, resulting in an overdose. PS the piano part has evolved a bit since the recordning and creds are due to the santurist who made his own part based on a simple score.

On the 4th August 2022 a part of the opera was performed in Stavanger Concert Hall as part of K&Mfest Stavanger.

“Elises klage” is the aria at the very end of the opera. Here, Elises is a soloist at her own funeral. The aria is performed with church organ or, as in this case, a concert organ, as well as a chamber ensemble.

Five Songs of the Bodied

Five Songs of the Bodied is a minimalist song cycle for voice and piano. Originally conceived for contratenor in order to reflect the frailty of the men, and their wish to be remembered as innocent boys, it has been arranged for a mezzo-range voice and piano, performed by Susanna Wolff and recorded by Komlava Sounds.

Five Songs of the Bodied is inspired by stories of Syrian men who have committed, witnessed or been victims of (sexual) violence between men, something that is associated with both trauma and shame. The songs are nevertheless abstracted to apply to more general agonizing regret and the existential crisis that may follow – quite relatable emotions and states of mind to many. The song (Nothing) mentions a number of definitions of nothingness, as found in philosophy, mathematics and theology.

Words and music by: Solveig Sørbø

Love Theme was originally composed for the film Hans pluss Liv (NRK – Norwegian National Broadcast), but this new arrangement has been written for the ageing star violinist Arve Tellefsen and a small ensemble. Tellefsen later withdrew stating he wasn’t content with his own performance, and Solveig instead brought in Catharina Chen. In this piece Solveig Sørbø employs different articulations of the guitar mixed with warm cello and impressionist piano to accompany Chen’s unique timbre and passionate musicianship.

In this 4 minute video you get a quick impression of Solveig Sørbø as a composer.

Heroin Chic opera in the media

Interview in Bygdebladet (in Norwegian, for subscribers)

Please note!: This is an unlisted page which includes original text an unfinished audio, and it is not intended for public circulation. Thanks for your understanding. Please do get in touch if you have any queries: solsnuu@gmail.com // +4745095002.